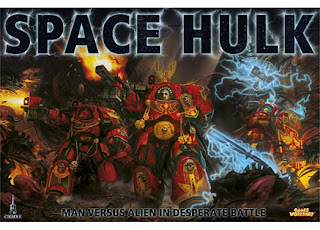 Hey guys, I hope everyone had a nice weekend.  So this weekend, as Halloween is approaching, our store manager organized a little event called Haunted Hulk. Utilizing the Space Hulk boxed game board and a few of the rules, basically, each person had a 6 man warband comprised of 1 unnamed HQ character, and 5 models from various unit entries in their codex. The idea was for each warband to have a different insertion point on the space hulk, and scavenge lost STC data from different computer terminals on the Hulk.

The catch is, when u attempt to retrieve the data from the terminal, we had to roll on a chart. one through 3 was rather bad as it spawns a random number of zombie depending on how bad you roll, and you end up with no STC data, while 4 through 6 was varying amounts of said STC data instead. Fighting in the narrow confines of the Hulk corridors made shooting rather sporadic, but also positioning of models critical, as they cannot pass each other in the narrow hallways, only in larger rooms when possible.

We had a good turn out of different factions for the game, with 2 Codex Space Marine chapters, 1 inquisition warband, 1 Chaos Marine, 1 Tau, 1 Dark Eldar, and 1 Necron. My salamanders boarding party were up for most of the game with the most data retrieved, while the Tau were dispatched by the Necorn player and the other Marine player as they had rolled poorly and ended up being mobbed by the undead and unable to bring their guns to bear. The Dark Eldar unit ended up dying to a man, but the Archon managed to slink away alone while holding 4 data packs on his own. The chaos player was only 1 point behind me by mid game, and was either going to come at me to get mine, or, like me, take on the Archon for his easy 4 points. Needless to say i believe in the motto "Nothing Risked, Nothing Gained" philosophy when playing a multiplayer game like this, so i rushed at the Archon. The Terminator Sergeant in my unit died to a lucky overwatch shot and a very bad armor roll by me before he even made combat. I pressed the Archon on all sides, only to mistakenly accept a challenge and then watch the archon make all 3 of his feel no pain saves. :/ Ah well, it happens. because he didnt fall back from the combat i couldn't make off with the data before the chaos warband crashed into the back of my ranks. i lost 2 of my Sternguard to them before choosing to break and run to make sure i kept my data. The chaos player ended up slaying the Archon and taking his points, giving him a total of 9, at which point i lost the lead of the game. but in a cunning masterstroke, the Necron warband, who had no data points for the whole game, risked all, and assualted the Chaos warband, actually managing to Slay the Daemon Prince carrying them all, and steal them for himself, winning the game on the last turn. (The Chaos player had been lucky enough to roll the Daemon prince on his Chaos Boon after killing the Archon, much to the dismay of everyone present.)

In all, everyone had a really fun time, each person bringing a relatively unique army composition due to the unique scenario of the game. (Basically you could by any non vehicle model by taking them at the "additional model" cost as their base price, up to 300 points total for the character and the unit combined, with not monstrous creatures able to be taken either.) Having played it, I really wish I had bought the Space Hulk game when it came out as it was a lot of fun. Even just the board changes the way you play considerably. (we also were only allowed to fight with models up to one tile away from a model in melee, meaning that hallways became excellent choke-points to hold off other people) I feel like buying the Zone Mortalis now, as this is also perfect for space hulk or ship based games in general and i would definitely like to play them more.

Have your stores run any games like this at all? what would you bring to a game like it? (as an example mine is below :) )