Removal In Store For Salvadoran General

In an unprecedented decision, Immigration Judge James K. Grim sustained all removal charges against General Eugenio Vides Casanova.
The Florida-based judge ruled last Thursday that Vides Casanova, former Minister of Defense of El Salvador, is removable from the United States for:
► Participating in the torture of two clients of the Center for Justice and Accountability, Juan Romagoza and Daniel Alvarado, among many other civilians, and
► Assisting or otherwise participating in the 1980 extrajudicial killing of the four American churchwomen and the 1981 Sheraton Hotel killings of two Americans and a Salvadoran land reform leader, among other massacres and assassinations.
In 1999, CJA, the San Francisco-based NGO about which we've posted, filed an Alien Tort Statute/Torture Victim Protection Act case on behalf of three survivors of torture against Eugenio Vides Casanova and Guillermo Garcia, also a former Minister of Defense of El Salvador. IntLawGrrl Beth Van Schaack was trial counsel in the case. In 2002, a West Palm Beach jury returned a $54.6 million verdict against both defendants. The case later was upheld on appeal, after a surprising reversal by the U.S. Court of Appeals for the Eleventh Circuit of an earlier decision reversing the jury verdict. (Romagoza-Arce et. al. v. Vides and Garcia, 434 F. 3d 1254 (11th Cir. 2006).

In light of the jury verdict, CJA met with representatives of the federal immigration service to request their review of Vides Casanova's and Garcia’s immigration status as lawful permanent residents. Thereafter, similar outreach was made to Department of Homeland Security and the Department of Justice.
In the meantime, CJA and other human rights organizations pressed for a revision of U.S. immigration law to make it easier to remove human rights abusers from the United States. They succeeded, with the enactment in 2004 of a provision in the Intelligence Reform and Terrorism Prevention Act. It allowed for the removal of persons who “ordered, incited, assisted or otherwise participated” in torture or extrajudicial killings. It now includes the crimes of genocide, severe violations of religious freedom, and the recruitment or use of child soldiers. The legislative history specifically mentioned the civil case against the Salvadoran generals. Over the next five years, key members of Congress continued to raise the visibility of the issue.
On October 6, 2009, DHS announced its initiation of removal proceedings against both generals. Vides Casanova’s immigration court hearing occurred in April and May of 2011. Garcia’s has not been scheduled.
In last week's ruling, the immigration judge made specific findings that Vides Casanova, as Director of the National Guard, had participated in the torture of Dr. Romagoza, which occurred during his captivity at the National Guard Headquarters.
The judge similarly ruled that Vides-Casanova, as Minister of Defense, participated in the torture of Alvarado, a plaintiff in Chavez et.al. v. Carranza, 559 F. 3d 486 (6th Cir. 2009), the CJA case against one of Vides’ top protégés and a commander put in power by Vides Casanova.
As I posted a while back, the two other chief witnesses were former U.S. Ambassador to El Salvador Robert White and Stanford University political scientist and El Salvador expert Dr. Terry Karl.
The judge's ruling is the first time the 2004 statute has been used successfully against a nation's top military official. It was premised on legal rulings which interpreted key language in the statute, including the meaning of “assistance” and “participation.” Unfortunately, at present, the full decision has not been disclosed publicly. Once it becomes public, a further analysis will be offer on IntLawGrrls. 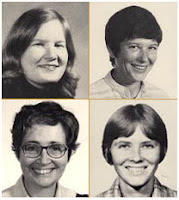 This post is dedicated to the four American churchwomen, Jean Donovan (top left), Dorothy Kazel (bottom right), Ita Ford (top right), and Maura Clarke (bottom left), who were killed in December 1980 in El Salvador. As posted, they were targeted by Salvadoran security forces under Vides Casanova and Garcia’s command because they were helping displaced persons, the poor and the disadvantaged survive in an atmosphere of horrendous state repression and appalling social, economic and political inequality.
Their sacrifice is remembered.