"The Law Of The Land: US Implementation Of Human Rights Treaties"

2010's coming. I've resolved to be more hopeful about prospects for implementing human rights in the U.S. In a promising move, Senator Dick Durbin, Chair of the Senate Judiciary Subcommittee on Human Rights and the Law, convened a significant hearing on human rights in the U.S. on 16 December 2009.
Testimony
The hearing, titled "The Law of the Land: U.S. Implementation of Human Rights Treaties," drew considerable attention from activists and the general public. It also warranted high-level administration testimony from both the U.S. Department of Justice (Thomas E. Perez, Assistant Attorney General, Civil Rights Division) and the U.S. Department of State (Michael H. Posner, Assistant Secretary for Democracy, Human Rights, and Labor).

Elisa Massimino, President and CEO of Human Rights First (photo, left (copyright 2008, Beowulf Sheehan/PEN American Center; see also IntLawGrrls post by Diane Marie Amann ) and Wade Henderson, President and CEO of the Leadership Conference on Civil Rights (LCCR), testified in person and led the NGO participation.Interest was so high that there was reportedly a standing-room crowd. More than 40 other human rights and U.S. civil rights organizations, including the American Civil Liberties Union (ACLU), Amnesty International USA (AIUSA), the Center for Reproductive Rights, the Rights Working Group, and the US Human Rights Network (USHRN) submitted written testimony. (The Bringing Human Rights Home network, Human Rights Institute, Columbia Law School has compiled the submissions.)
One Step Forward, More Steps Needed
IntLawGrrls have been very active in advocating for increased U.S. recognition of, and adherence to, international human rights legal standards internally (see many individual posts and our Human Rights in the U.S. series.) As lawyers and activists celebrate the increasing administrative, legislative, and, (one can hope) prospective judicial attention to this issue, plenty of work remains to be done. Some of it will occur in legislatures (whether federal or subnational) and courtrooms, but a lot of pragmatic work can happen in classrooms and social media contexts as well. Among the framework issues are the following:
►U.S. signature and ratification of core international human rights treaties (such as those listed in my previous post);
►Reorganization of the U.S. Civil Rights Commission into a Civil Rights and Human Rights Commission (as advocated in an American Constitution Society report by Catherine Powell discussed in Diane Marie Amann’s post);
►Passage of implementing federal legislation to clarify enforcement effects of ratified treaties;
►Inclusion of human rights in childhood and adult educational and social media settings in order to build popular awareness, critical analysis, and pressure on political representatives to adhere to human rights norms (see a compendium of good practices from the Human Rights Education Association website.)
My July 2009 post noted with optimism the presidential signing of the Convention on the Rights of Persons with Disabilities (CRPD) the first major international human rights treaty to be signed by the U.S. in 10 years. IntLawGrrl Connie de la Vega recently posted on the enormous advantages for children in the U.S. of ratifying the Convention on the Rights of the Child. And, in this, the 30th year since its adoption by the United Nations General Assembly, the Convention on the Elimination of All Forms of Discrimination Against Women (CEDAW) remains unratified by the U.S.
Economic, Social, and Cultural Rights in the U.S.
Further, the bitter debates and misperceptions surrounding the passage of U.S. health coverage reforms should be more fully informed by international and comparative jurisprudence and scholarship on the nature, scope, and practical implementation of economic, social, and cultural rights. (See a posthumously published essay on Health Care as a Basic Human Right: Moving From Lip Service to Reality by the late Senator Edward Kennedy here.) At a time when poverty, joblessness, homelessness, and rising health costs and disparities are a nationwide concern, U.S. ratification of the International Covenant on Economic, Social, and Cultural Rights (ICESCR) could add a fresher and more equitable approach to social justice reform efforts.
Civil Society Participation
Ratification, legislation, judicial interpretation, and political action on human rights issues matters. Recent efforts by US-based NGOs to apply the International Convention on the Elimination of All Forms of Racial Discrimination (ICERD) to U.S. problems such as discrimination in housing, criminal justice, and education are an inspiring example (see posts in our series on CERD and Race in the U.S.) Human rights advocacy draws national, even global, attention to important problems, galvanizes social action, and if properly implemented, can help chart participatory solutions.
No Time Like the PresentNow is the time. We can't afford not to pursue U.S. implementation of human rights at home and abroad. They should be integral aspects of U.S. domestic and foreign policy agendas. Such a commitment would be a great way to begin a new year. (Source for photo of Wade Henderson (bottom, left), who testified at the Durbin hearing, and Lilly Ledbetter (right) at the presidential signing of the Ledbetter Fair Pay Act.) 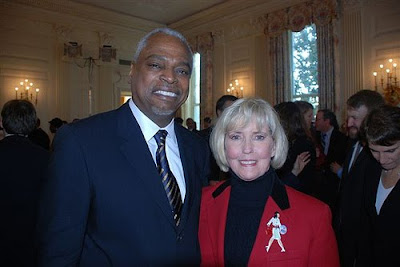